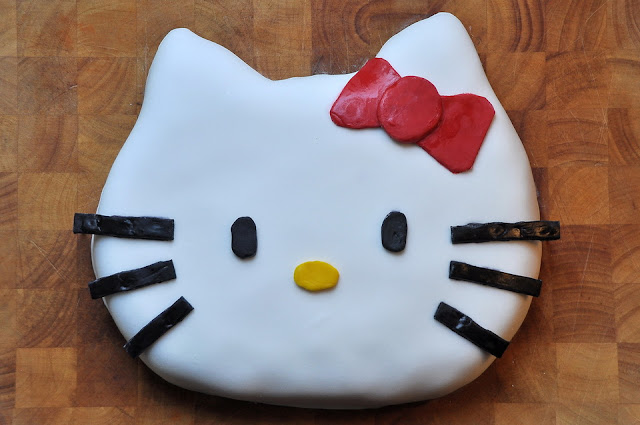 My super talented cousin Moya made this cake for her birthday earlier this month. She's clearly an ace with the fondant icing, and sent it to me because Hello Kitty always makes her think of me. When I found out it was gluten-free, I had to ask why.

Neither Moya nor anyone in her immediate family needs to avoid gluten, but recently she's hosted some of the most celebrated kiddie parties in Ottawa. What she learned is that a very high ratio of her boys' friends are not eating gluten. Thirty percent to be exact.

Given these stats, she had contacted me looking for cookie recipes. Apparently, parents offered to send their child to the party with their own treats (typically a good defense)... but Moya was determined to make her kids' parties inclusive. The cake would be gf too. 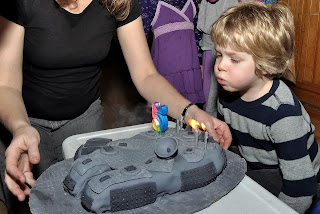 At Seth's 5th birthday, the theme was Star Wars. The cake - a very manly looking Millenium Falcon. She tells me that the cake was such a hit (not just cool - but tasty too) that she decide to make her own cake (see the much girlier version at the top of this post) with the same gluten-free recipe. You can find that recipe by clicking HERE.

When you are a little kid (or a big one for that matter), not being able to participate in ceremonial food is even harder than avoiding the day to day stuff. Ceremonial food - like birthday cake is a very emotional time (complete with fire and wish-making no less!). Watching, but not partaking, particularly as a kid can feel very alienating within the tribal atmosphere. Kudos to my cousin Moya who has always been as sensitive to the hearts of those around her - as she is to their stomachs.

The Right to Safe Food is a program involving the Canadian Celiac Association to make sure that everyone with a medical need for gluten-free food can get it. The program was born of reports from many members who were not able to get safe, gluten-free food when they were being fed by various institutions, including senior’s residences, nursing homes, hospitals, day care centers, school and business cafeterias, and university and college residences. You can read more on the Canadian Celiac Association site HERE.

May is Celiac Disease Awareness month in Canada. Turtle Jack’s 14 participating restaurants and the Canadian Celiac Association will jointly host a fundraiser to raise money for the Right to Safe Food Program.

Each Monday this May, people will be encouraged to dine at participating Turtle Jack’s restaurants to support this important work. Customers will use coupons to indicate their support of the fundraiser and the restaurant will donate 25% of each bill to the Right to Safe Food Program. 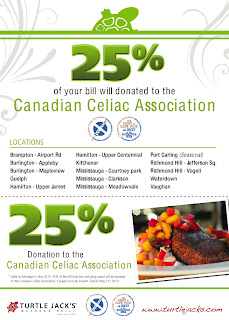 Turtle Jack’s restaurants have worked with members of the Canadian Celiac Association to implement procedures to educate their staff and managers on the intricacies of preparing and serving gluten-free food. A new gluten-free menu has been launched. These efforts have created a safe place to dine for those with celiac disease.

Visit the Celiac Association website HERE to download the coupon and find other links related to this campaign.

We are seeing a lot more gluten-free options on menus - and certainly on store shelves. I particularly like this program because they've taken the time to learn more about what it really means to be gluten free for someone who must adhere to the diet for medical reasons.

I am also promoting this program because I believe that we vote with our wallets. Celiac groups around the world can benefit from this type of cause related marketing program. Good for business.... and good for us!

The French word for bread is PAIN.

Carol brought these Pain des fleurs Organic Buckwheat Crispbread crackers over to our place last weekend. Their arrival brought a huge smile to my face. The first time I'd tried this line of products was in Paris a few years ago. I'd found them in a health food shop around the corner from the apartment we rented. Perhaps they weren't as appetizing to look at as the baguettes displayed in baskets everywhere... but they did the job and made an excellent accompaniment to all of the phenomenal cheese I gorged on.

Upon my return, I did see this product line now and again on store shelves here in Canada, but could never pull the trigger. It have a hard time wrapping my mind around almost $7 for a box of crackers when I'm not on vacation.

Boy am I glad Carol is not as frugal as I am! I'd forgotten how delicious they are - AND they have one ingredient: organic buckwheat. That's it. They have a quiet toasted, nutty flavour that would go with lots of things. Added bonus: all of 20 calories per piece - and they are the size of a slice of gluten-free bread!

In short, if you are looking for something to break up the monotony of rice crackers, or avoid the high fat content and not so healthy ingredients found in most other gf cracker options - I'd break the bank and treat yourself to a box of Le Pain des fleurs. Despite the name, they bring no pain - and if you eat an entire box, no harm done to your waistline or your health. These crispbreads are also available in quinoa or chestnut. All gluten-free and organic. You can find their website HERE.
Posted by claudine at 13:12 3 comments 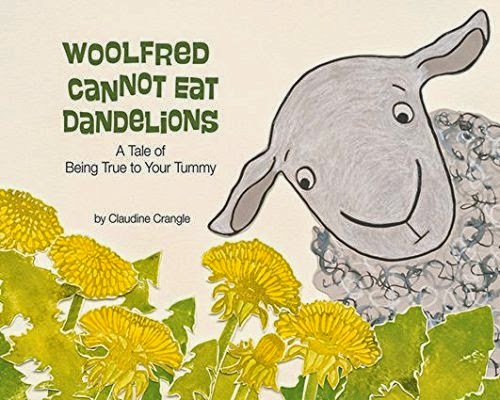 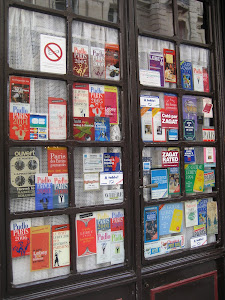 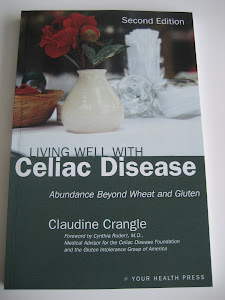